Happy Birthday to My Homeland 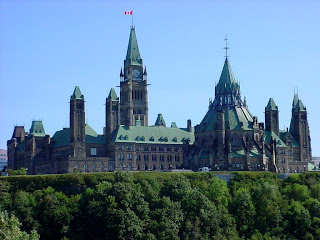 Happy Birthday to my homeland of Canada.
I have posted the English and french versions of our National Anthem "O Canada". Here is the English translation for the french version, for those of us not fluent in both official tongues.
O Canada! Land of our forefathers
Thy brow is wreathed with a glorious garland of flowers.
As in thy arm ready to wield the sword, So also is it ready to carry the cross.
Thy history is an epic of the most brilliant exploits.
Ch.Thy valour steeped in faith
Will protect our homes and our rights
Will protect our homes and our rights.
It saddens me that the English version has stepped away from honouring God as being the true founder of our great country. In an attempt to keep non-Christians happy, our true heritage has been stripped from our National Anthem.
History/L'histoire
"O Canada" was proclaimed Canada's national anthem on July 1, 1980, 100 years after it was first sung on June 24, 1880. The music was composed by Calixa Lavallée, a well-known composer; French lyrics to accompany the music were written by Sir Adolphe-Basile Routhier. The song gained steadily in popularity. Many English versions have appeared over the years. The version on which the official English lyrics are based was written in 1908 by Mr. Justice Robert Stanley Weir. The official English version includes changes recommended in 1968 by a Special Joint Committee of the Senate and House of Commons. The French lyrics remain unaltered.
Originally "O Canada" was a patriotic poem by Sir Adolphe-Basile Routhier, a Quebec judge. Calixa Lavallée, the well-known Canadian composer, was commissioned to set it to music, and it was first sung in 1880 during a national convention of French Canadians in Quebec City.
Many English versions have appeared, but the one which was widely accepted was written in 1908 by another judge, R. Stanley Weir, in honour of the 300th anniversary of the founding of Quebec City. It was amended in 1913, 1914 and 1916 and published in an official form at the time of the Diamond Jubilee of Confederation in 1927 and during the Royal visit of 1939.
A slightly modified version of the first verse of Weir's poem was proclaimed as Canada's national anthem in 1980.
The original poem of 1908 by Stanley Weir reads as follows:
"O Canada! Our home and native land!
True patriot love thou dost in us command.
We see thee rising fair, dear land,
The True North, strong and free;
And stand on guard, O Canada,
We stand on guard for thee.
Refrain
O Canada! O Canada!
O Canada! We stand on guard for thee
O Canada! We stand on guard for thee.
O Canada! Where pines and maples grow.
Great prairies spread and lordly rivers flow.
How dear to us thy broad domain,
From East to Western Sea,
Thou land of hope for all who toil!
Thou True North, strong and free!
Refrain
O Canada! Beneath thy shining skies
May stalwart sons and gentle maidens rise,
To keep thee steadfast through the years
From East to Western Sea,
Our own beloved native land!
Our True North, strong and free!
Refrain
Ruler supreme, who hearest humble prayer,
Hold our dominion within thy loving care;
Help us to find, O God, in thee
A lasting, rich reward,
As waiting for the Better Day,
We ever stand on guard.
Refrain.
This poem truly reflects what Canada is all about for me... it is a country created by God, in the image of God and must be willing to thank God daily for all of the wondrous bounties we have been provided.
Tonight as I lay myself down to sleep I will be praying to God using the words of the poem written by Weir, especially the last verse.

Ruler supreme, who hearest humble prayer,
Hold our dominion within thy loving care;
Help us to find, O God, in thee
A lasting, rich reward,
As waiting for the Better Day,
We ever stand on guard.

Romans 12:3 (The Message)
I'm speaking to you out of deep gratitude for all that God has given me, and especially as I have responsibilities in relation to you. Living then, as every one of you does, in pure grace, it's important that you not misinterpret yourselves as people who are bringing this goodness to God. No, God brings it all to you. The only accurate way to understand ourselves is by what God is and by what he does for us, not by what we are and what we do for him.
Posted by CrowtherKidsMom at 18:49 No comments: